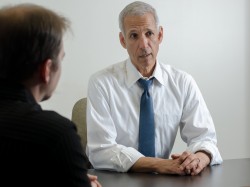 Named as one of the TOP ONE HUNDRED CRIMINAL DEFENSE LAWYERS in Southern California by the National Trial Lawyers Association in 2017, Jerrold Bodow, our criminal defense attorney at Coastal Legal Center APC, is here to help if you have been accused of a crime in San Diego County, Southern California, and beyond. We defned our clients and fight for their rights!

We thoroughly investigate the allegations against our clients, review all police reports and other documents, and examine the legality of tactics used by the police, as well as collect information from witnesses about the event in question. We thoroughly study the facts surrounding our clients’ cases to properly and successfully defend them, no matter the charge or accusation. In short, we take every step necessary to protect your legal rights.

If you are currently facing a felony or misdemeanor charge in California, you need the help of a skilled and knowledgeable criminal defense attorney. Attorney Jerrold Bodow has more than 35 years of criminal law experience representing Californians who have been charged with crimes. We thoroughly investigate every angle of a case to determine any potential discrepancies and search for the many ways to have the charges reduced or, if possible, dropped completely. Having worked with the judges and the prosecutors in all the courts across the county, Mr. Bodow successfully negotiates on his client’s behalf. Being respected and liked goes a long way in the San Diego legal community.

Minor in Possession of Alcohol (MIP) in San Diego

Some states make exceptions to minor in possession laws, depending on the jurisdiction. For example, some states allow minors to legally possess alcohol if an educational course permits it, if they are under adult supervision, if alcohol is needed in a religious ceremony, or if they are employed by a vendor that sells alcohol. An experienced criminal defense attorney will evaluate all state exceptions when representing clients who are being charged with a MIP offense.

For individuals who are facing minor criminal charges and require an experienced criminal defense attorney to help them fight their charges, you should contact the Coastal Legal Center APC to have the charges reduced and possibly dropped altogether.

Charged with a DUI in California

If an individual is convicted of a second or third DUI offense, the consequences result in more substantial fines, longer jail sentences, extended license suspensions, and longer probationary periods. Because DUI laws are so complex and every case is unique, it is essential for individuals who have been charged to understand their rights and the legal consequences of their actions.

Those who feel as though they have been unfairly treated, wrongfully charged, or are suffering from inappropriate consequences should contact Coastal Legal Center APC to consult with a member of our legal team. We also help clients who may be charged with other allegations such as juvenile DUI, DUI with bodily injury, or driving with a suspended license.

For those who have committed accidental homicide, the consequences are not as severe as those who commit premeditated “murder”. The consequences for such actions can include a life sentence in prison or, in the most heinous cases, the death penalty.

In California, those who are convicted of DUI are notified that driving under the influence is dangerous and if they continue to drive under the influence and kill another individual, they can be charged with murder. It is that notification that gives them the state of mind, or mens rea, required for a murder conviction. This differs from the past where the maximum charge was vehicular manslaughter when a driver under the influence, negligently killed another.

Jerrold Bodow has successfully represented those charged with killing another person driving a car while under the influence. These tragic cases take both legal skills and the ability to assist the client through an extremely traumatic event. These drivers never meant to kill someone, and the fact that they did so often leaves them with intense feelings of guilt, worthlessness, anxiety, fear, and remorse. At Coastal Legal Center APC, we work with a team including mental health professionals to assist the client and the clients family in getting through this agonizing process.

For those accused of committing a homicide, it is essential to hire an experienced criminal defense attorney who understands the distinction between and consequences of first and second-degree murder, as well as which circumstances determine whether a homicide is a crime of passion. A knowledgeable criminal defense attorney from Coastal Legal Center APC will gather all of the facts and collect enough evidence to mount a client’s defense.

We also help clients who may be accused of other crimes, such as:

If you’re wondering whether your case falls within one of these categories, call Coastal Legal Center APC for a free consultation today. We will evaluate your situation, and clearly discuss all of your legal options.

Although we are located in San Diego, we help out-of-state clients who may be charged with any of the above allegations. We work with most other states as well as all areas across California. We have a team consisting of specialists in different fields we work with to help us successfully defend our clients. Our non-legal team includes:

Our specialists help us analyze and assess whether there has been a wrongful charge based on any unnoticed inconsistencies as well as defend you against prosecutors who use specialists in the government’s case against you. We utilize our resources to ensure we do everything within our power to help support your case. Although the prosecution has the burden of proving a suspect guilty beyond a reasonable doubt, a strong offense is a good defense. The defendant doesn’t need to prove his or her innocence, but the more evidence in your favor, the better. Our job is to develop as much evidence reflecting innocence as possible.

If you or someone you love need an aggressive and knowledgeable criminal defense attorney, contact Coastal Legal Center APC. To speak with a skilled criminal defense attorney about the charges you are facing, contact us at 619-231-0724 for a free initial consultation with a member of our legal team. We are standing by, waiting to take your call. If urgent call 619-300-0660 at any time.