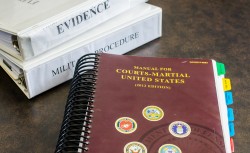 The military has its own justice system, its own judges, and its own rules for conducting trials. Our San Diego court martial military lawyer works from outside the system to protect your rights within the system. We are prepared to represent clients in general and special courts martial as well as advise clients regarding administrative discharges, non-judicial punishment, or captain’s mast.
Often, a case charged as a general court-martial can be reduced to a special or summary court martial after an article 32 preliminary examination by an investigating officer.

Military personnel can be charged with criminal offenses in both civilian court and military court, which are two separate Justice Systems. A conviction in either court system will ruin your military career.

Hiring civilian attorneys outside the military system is smart. Hire carefully and look for experience with the Uniform Code of Military justice (UCMJ) as well as the civilian courts.
You need an aggressive defense in all civilian or military proceedings. We will defend you in a wide range of military law matters, including:

If you are in the service and have been charged with a crime in a military or civilian court, please contact Coastal Legal Center for a free initial consultation. We can be reached by phone toll free at (858) 848-5290, by e-mail, or by filling out our intake form.